Twelve days of Christmas Carol Illumination series: This is a 12-card series of illuminated interpretations of each of the 12 stanzas of the ‘Twelve Days of Christmas’ carol. The series is a personal exploration of medieval art, especially as regards techniques of medieval illumination that were prevalent in the illuminated manuscripts produced in the scribal guilds of Ghent and Bruges. I started the series as a way to manage the COVID19 isolation–and also, because these were the perfect conditions for intense immersion—learning as much as I could about a subject which has always intrigued me. 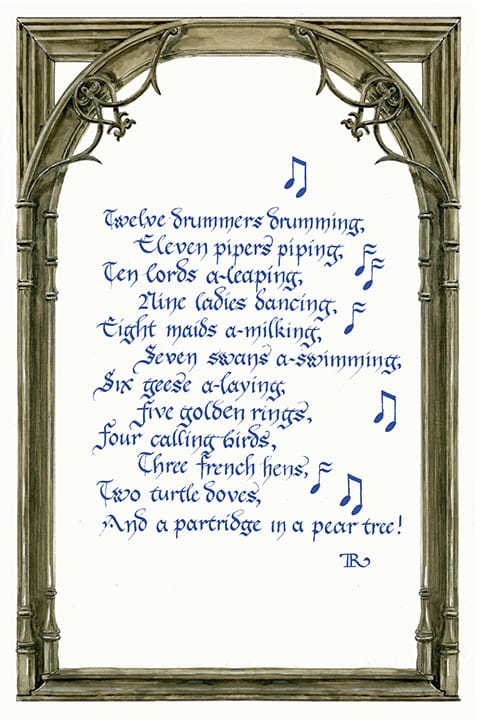 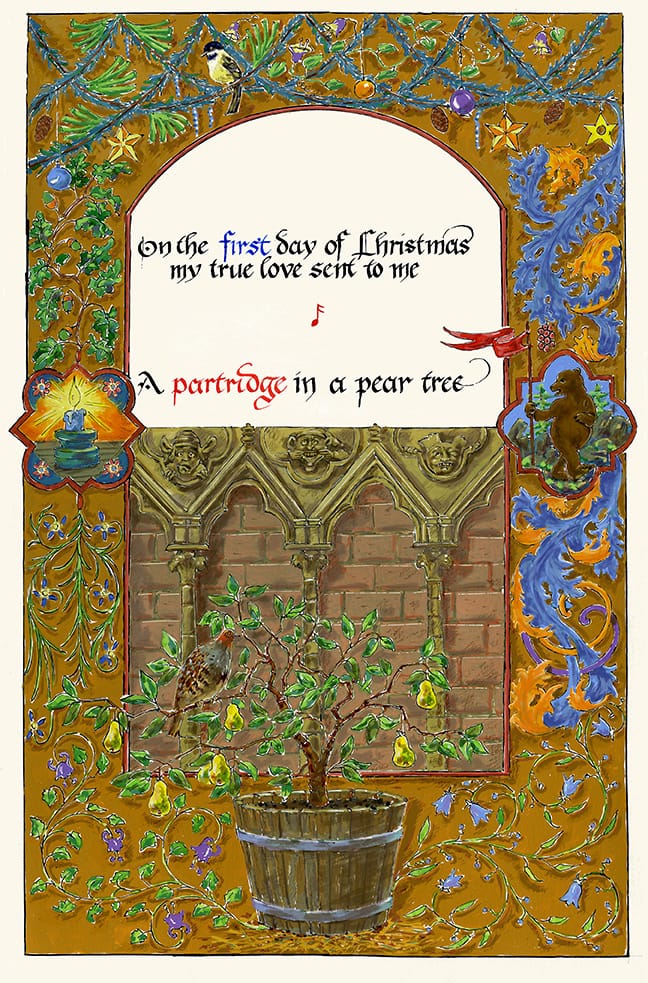 First Day: The partridge in the pear tree is imagined against a backdrop of gothic architecture, complete with gargoyles–creatures I greatly admire. If you happen to be in the vicinity of Queen’s Park or Old City Hall in Toronto, you may even spot their like. 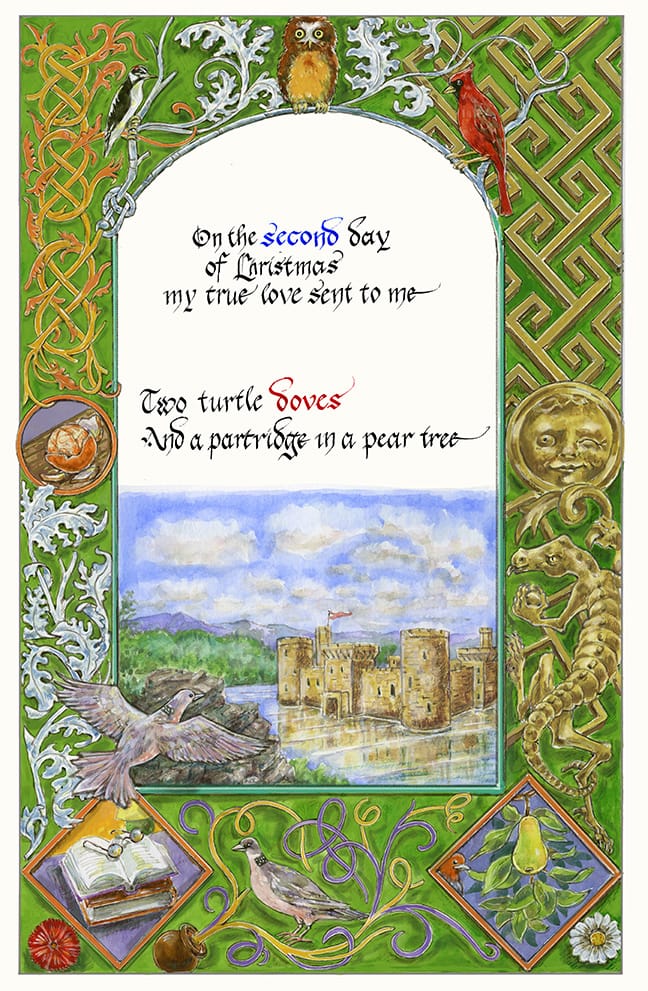 Second Day: Turtle doves are perhaps collared doves, flying in the vicinity of a castle, floating on an island in a still lake; while a wise owl looks on 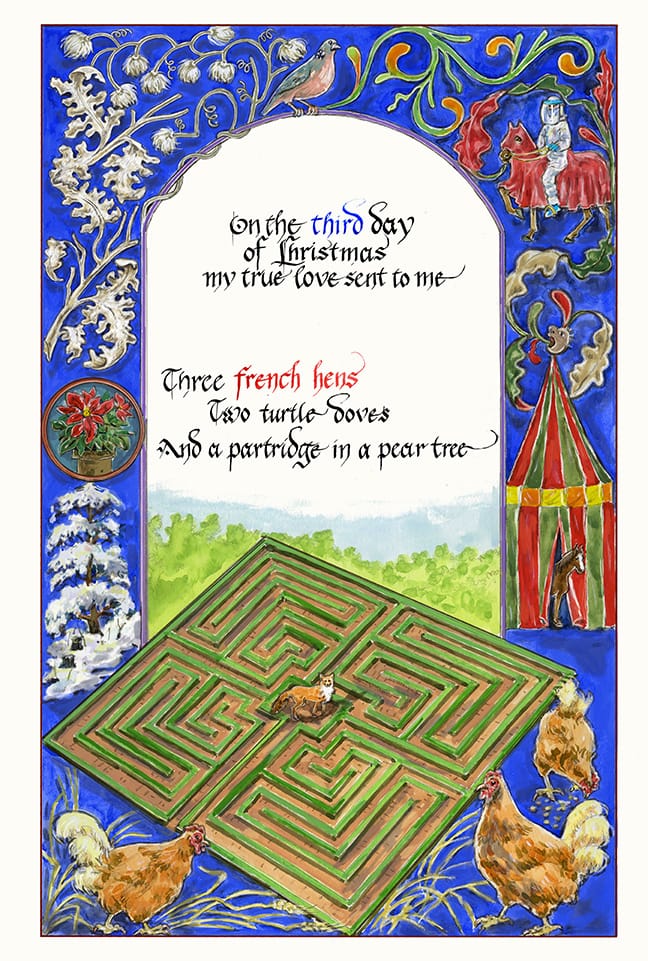 Third Day: Those hens will try anything, even a complicated labyrinth. You might need to go after them before the fox gets them! The labyrinth is another wonderful artifact that has come down to us from our ancestors. This one is reproduced from a Roman floor mosaic found in several locations in the ancient Roman empire. Note the health care worker knight in shining PPE 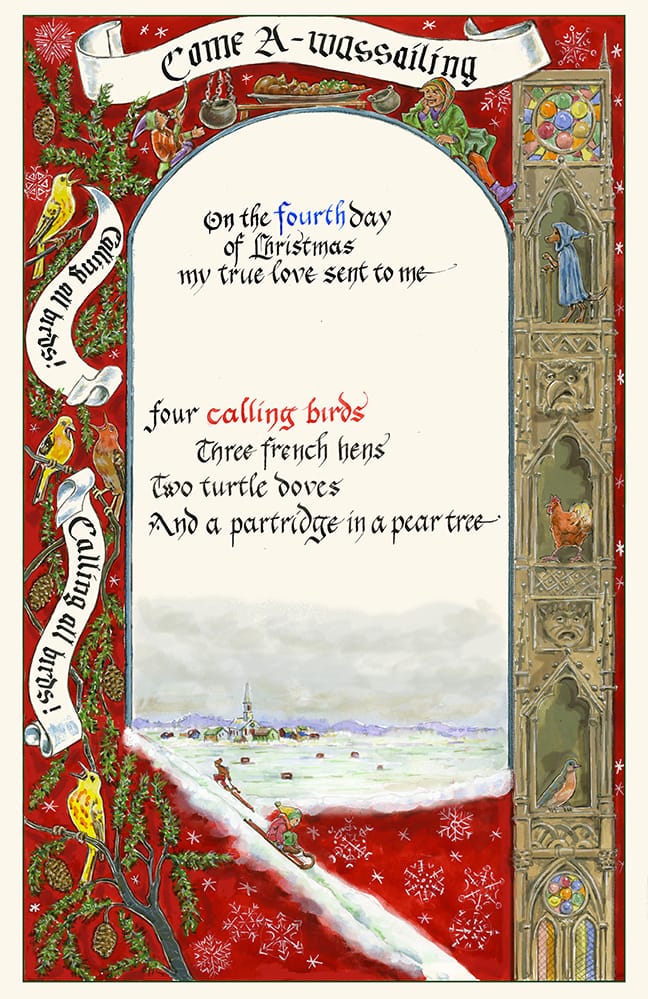 Fourth Day: Medieval visual humour–a dog standing upright, supported by a walking stick, in a blue cloak–found in my researches into manuscript illumination iconography. There were many such strange figures in minuscule corners of those ancient pages. 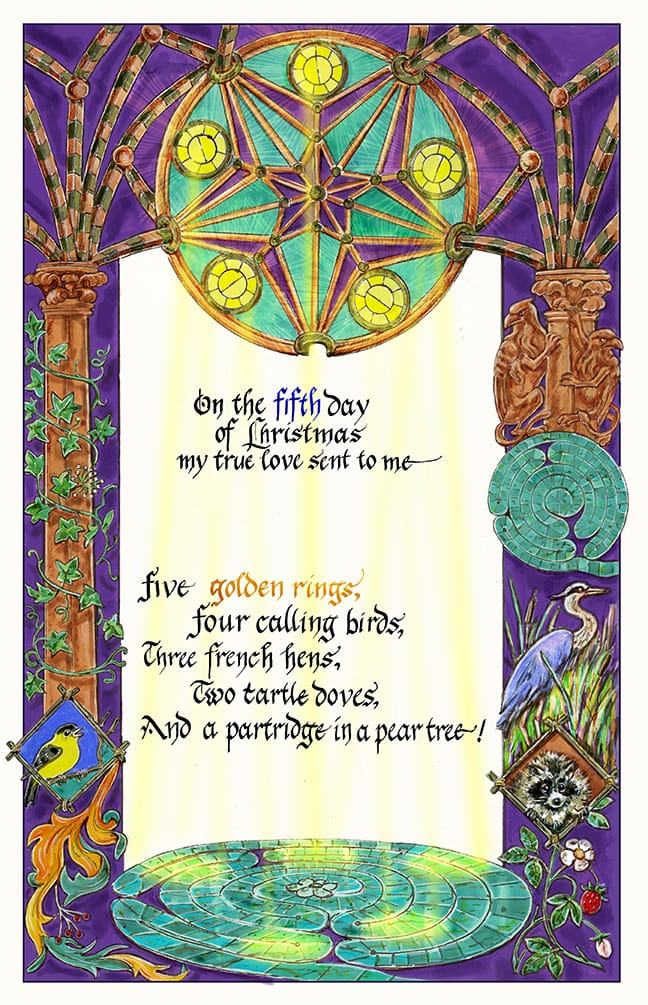 Fifth Day: I pondered how I might interpret this stanza and then remembered the wonderful medieval cathedrals rose windows. Five rings of sunshine fall ephemerally to the cathedral floor–comprising yet another labyrinth copied from the murky past. 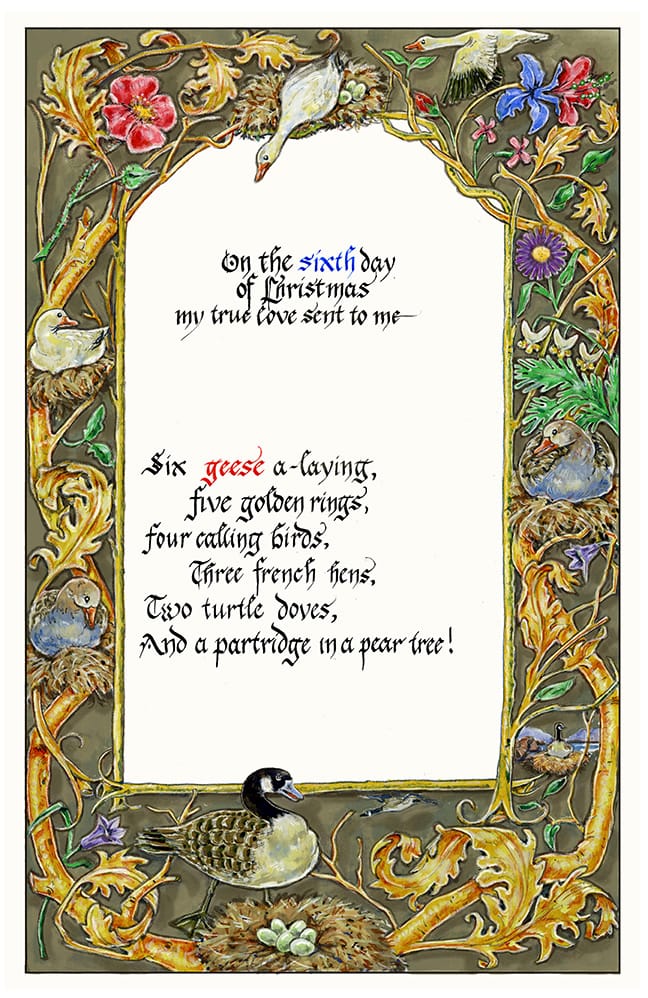 Sixth Day: Inasmuch as I wished to contemporize the fine tradition of medieval illumination, by climbing onto the shoulders of those artists of the Flemish guilds, I tried to include my own local flora and fauna in the illustration. So, my laying geese belong to my North American environment. You have Canada Goose, Grey Goose, and Snow Goose in their element. 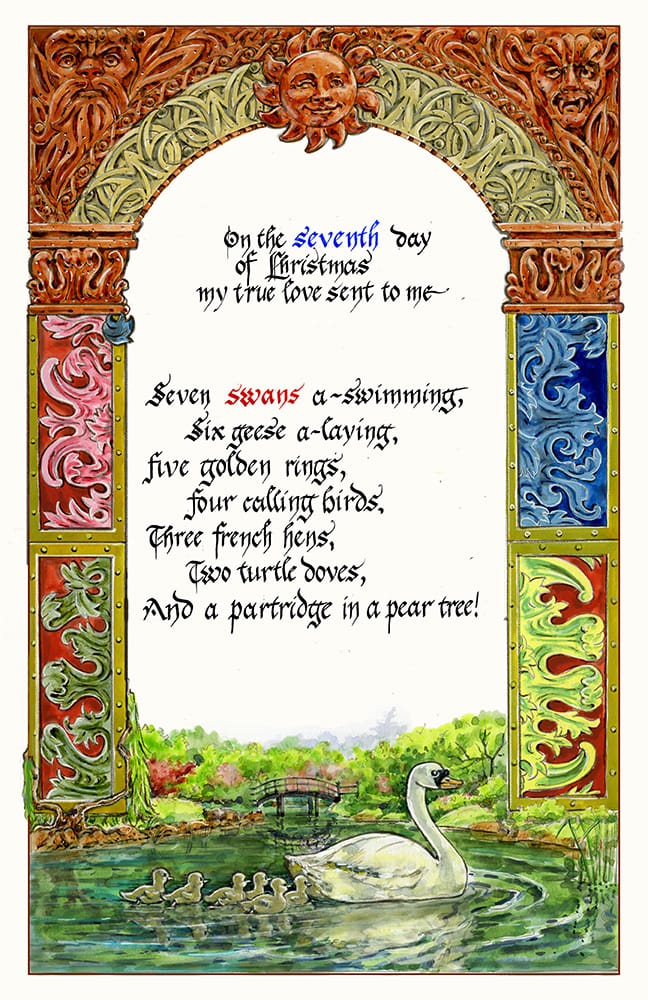 Seventh Day: Along with the iconography of the medieval illuminators, I also enjoy the tactile decorative motifs that can be found in Gothic architecture–whether serpentine plants, weird faces or just abstract decoration all turned to stone. 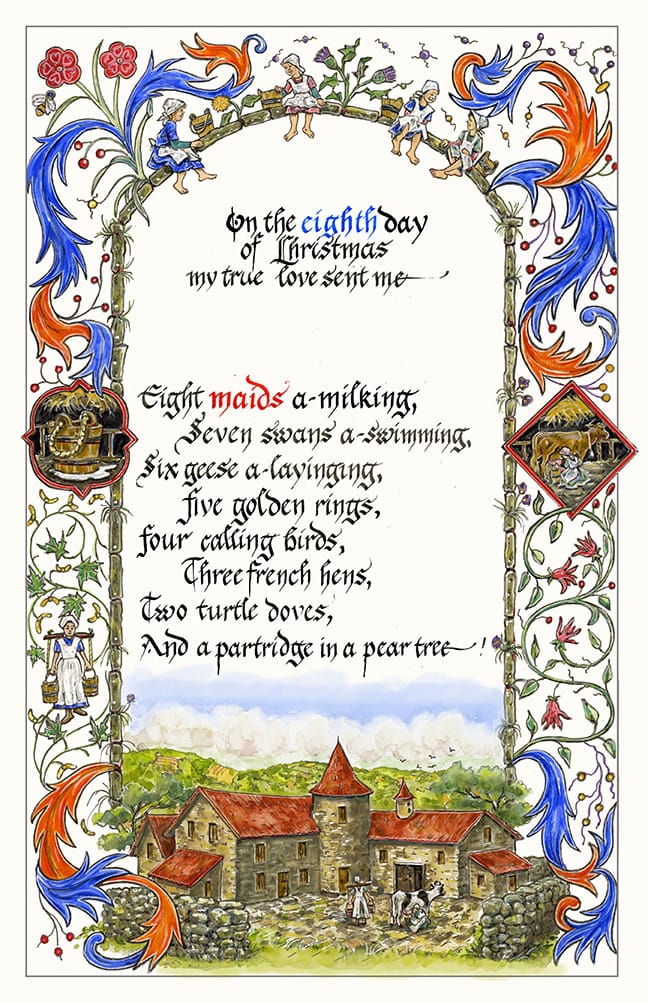 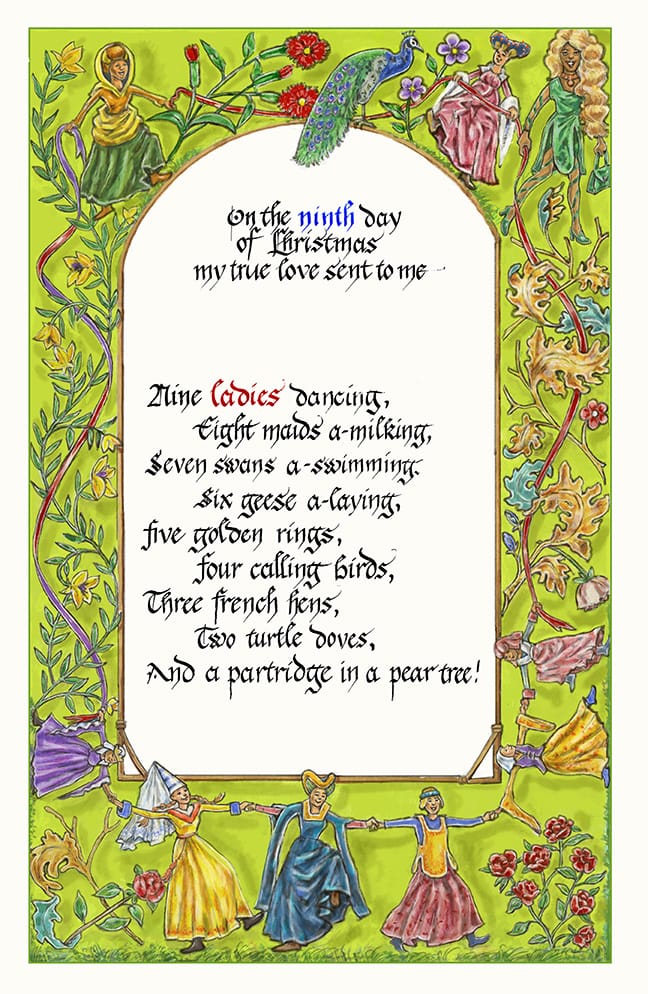 Ninth Day: Eight of these nine ladies were glad to include the gorgeous, glamorous glitz of Ru Paul in their feminine dance 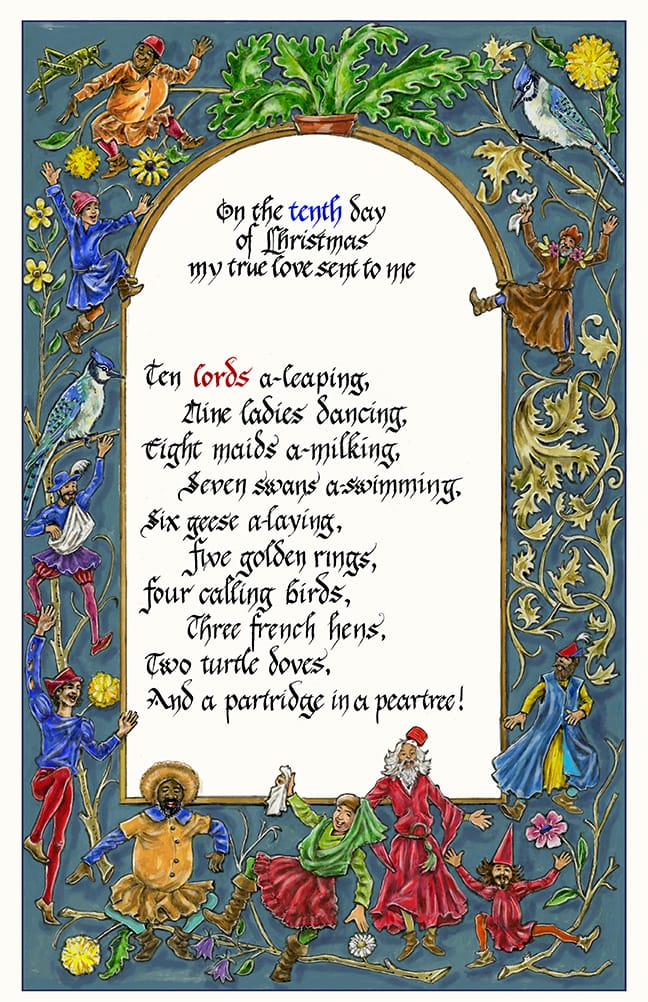 Tenth Day: Medieval men dressed extravagantly and all of this is recorded in the many illuminated manuscripts that have come down to us. Scouring the library books and the Internet gave me a good sense of that fashion causeway. 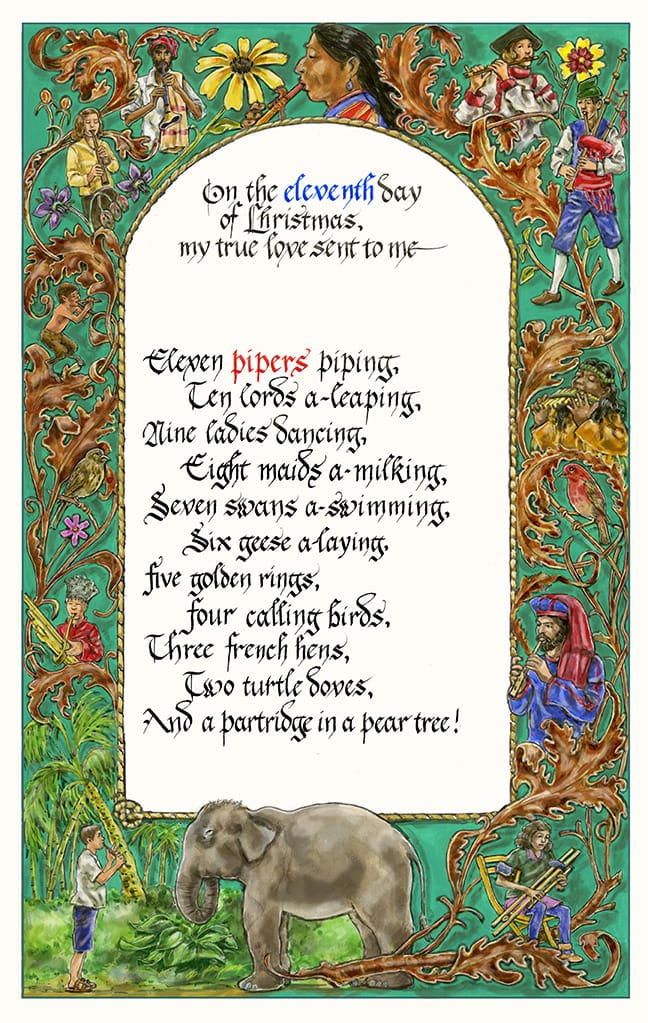 Eleventh Day: Pipes have been around as long as there have been humans on earth and there is a plethora of examples of blowing musical sounds–from the haunting beauty of the Uilleann Pipes, to the mysterious Hmong spirit pipes to the quiet harmonies of Andean pipes. Best moment in my online researches was coming across Paul Barton, who plays music to help rehabilitate ill-treated elephants in Thailand. Here he is playing on a home-made pipe to an old, blind elephant, who listens intently. You Tube at times delivers wonders. 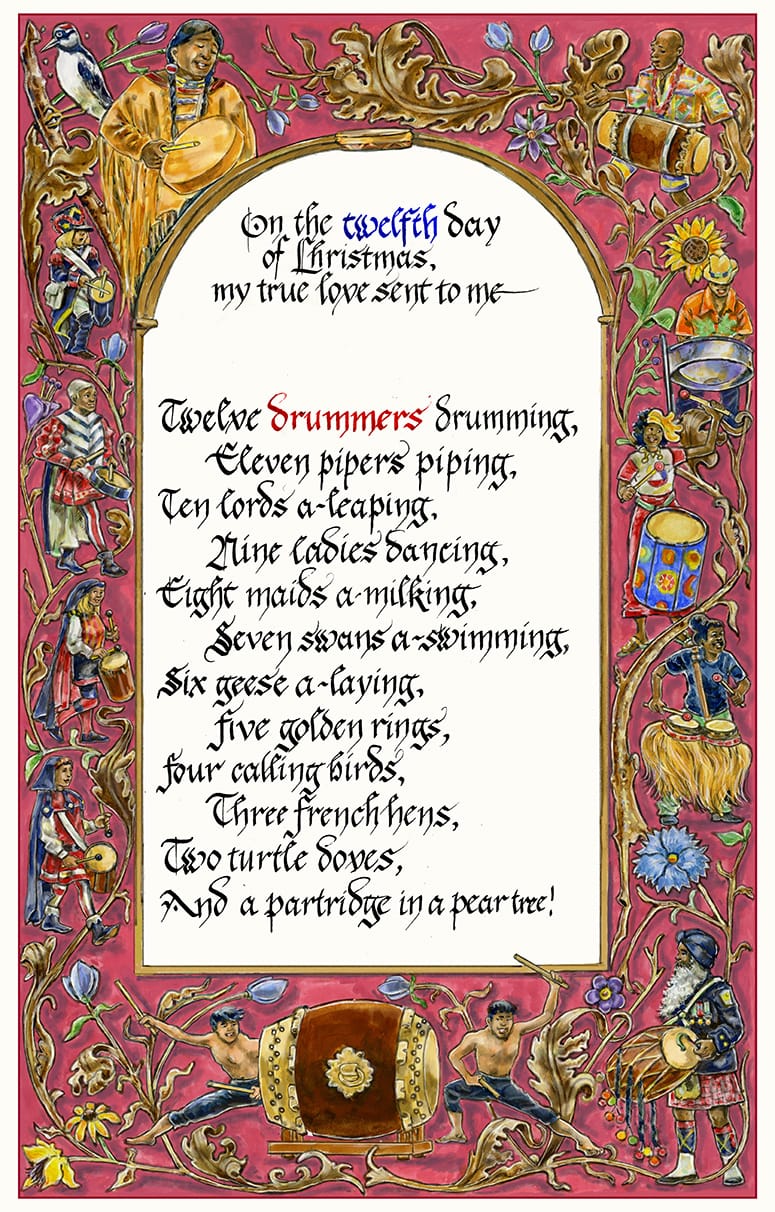 Twelfth Day: As with the pipers, I wanted to find drummers from around the world and scoured the Internet for representatives. Included are drummers from Africa, North America Indigenous community, Brazil, Japan and medieval re-enactors. Last of all is Sukhvinder Sunger, a Vancouver Police Department officer and a Vancouver Police Pipe Band member (bottom right corner) who appeared alongside Gurdeep Pandhur [external link], the inveterate Bhangra dancer who lives in the Yukon and spreads joy and positivity to the world and has kept me smiling during the COVID19 passage. 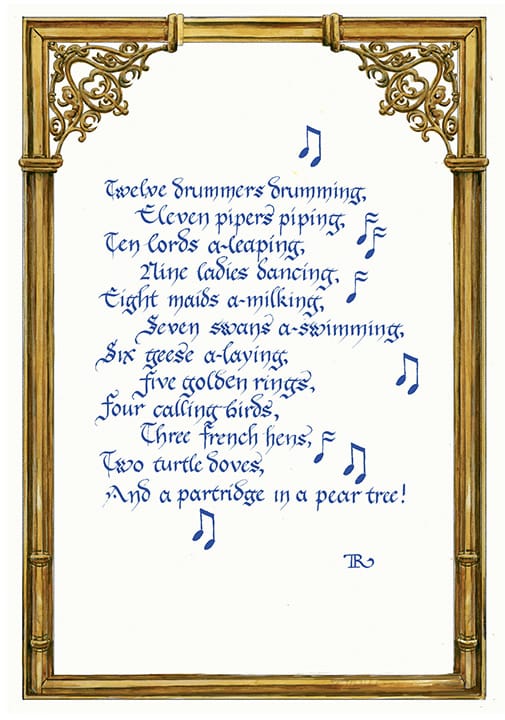 If you wish to purchase the set, please contact me at artbyrt[at] gmail[dot]com for information